Check the Blog for LL-1786 for details.  Another BAD EGG gets their "Integrity" stepped on!!
http://stll1786.blogspot.com/
Posted by District Communicator at 9:25 PM

Click on this to see what you missed at the April 24th, 2010 NASA Jobs Rally.
Posted by District Communicator at 4:32 PM 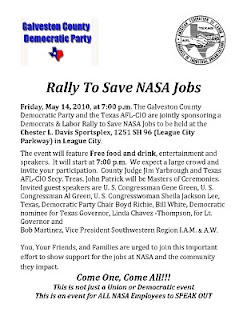 Come out and show your support, it is in your back yard and only a couple of hours out of your day. This is a very worthwhile effort, please make it a point and plan to be there. This is not just for Union members, it is for EVERYONE that works at NASA, Contractors and Civil Servants alike.
Here is how to get there:

Posted by District Communicator at 3:34 PM 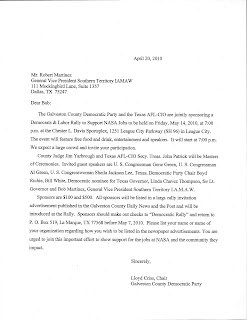 We have another opportunity to show our solidarity and that the Jobs at the Johnson Space Center are an important, necessary part of the South Houston, Clear Lake, and surrounding communities.
The Space Center has provided jobs for a majority of the inhabitants of this area for more than 35 years.  Enlisting the talents of 3 generations of technical and engineering families to ensure that the space program carries on in the same manner that the world has come to expect.
PLEASE Make Time to come by the sports complex to hear the speakers and make your voices heard, let Washington know that we are a force to be reckoned with.  And we will not tollerate the misinformed decisions dictate the future of this economy that we all have worked so hard to establish and maintain for more than 3 decades.
This gathering is in our own backyard, there is no reason to have the deplorable turnout that was noted at the IAMAW rally last week.  WE ALL NEED TO BE THERE, and bring your families, bring your friends and neighbors too.  This effects EVERYONE in this community, not just those of us that work at NASA.
If you cannot read the details, they are:
"County Judge Jim Yarbrough and Texas AFL-CIO Secretary Treasurer John Patrick will be Masters of Ceremonies. Invited guest speakers are US Congressman Gene Green, US Congressman Al Green, US Congresswoman Sheila Jackson Lee, Texas Democratic Party Chair Boyd Richie, Bill White, Democratic nomine for Texas Governor, Linda Chavez-Thompson for Lt. Governor and Bob Martinez, GVP-Southern Territory IAMAW."
The event will commence at 7:00pm Friday, May 14th, 2010 at the Chester L. Davis Sportsplex, 1251 League City Pkwy (Hwy 96) in League City.  There will be free food and drink, they are expecting a large crowd, Plan ahead.
I look forward to seeing everyone from 1786 there, and meeting your families.
Posted by District Communicator at 6:27 PM