Preserving Our Space Programs and Saving Our Jobs 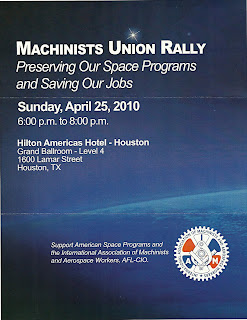 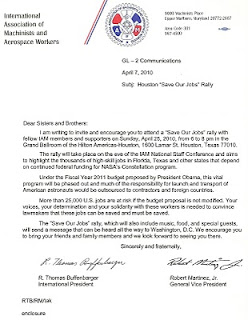 Brothers and Sisters,
Last week we saw and heard the President speak from the Kennedy Space Center about the plans for NASA's future, did you also read that there were nearly 4000 people rallied at the IAM Space Rally prior to the speech.  We are facing hard times in the space program all over the country, the primary issues are in the Southern states with sites in Texas, Alabama, and Florida. This is where the jobs are in jeopardy.
For some reason everyone seems to think that NASA is at the Cape.  The forefront of the space program is based out of the Johnson Space Center here in Houston.  All the planning, All the research, all the Training for the Manned space program and that of every other program that NASA is involved with is based out of the Johnson Space Center, We here in Houston are the Heart beat of the space program in all facets of the industry.  We need to show the world, the industry, and the President that Houston is the primary focal point of the space program, WE need to show our solidarity in all areas of the space program.  WE all need to attend the rally at the Hilton Americal Hotel for every one to see, the White House, Senate, Congress, and even our own International.
Make plans to attend the rally, bring along a working partner that is skeptical about the Union and doesn't really know if they want to join, let them see first hand what the IAM is all about and why they NEED to be a memeber.
The Future of the Space Program, and the Future of Your Own Employment and Families Future is at Stake.
Come to the Rally, Meet your Union Brothers and Sisters that represent you and your families.
The Entire IAM Staff will be there, Lets show them that Houston is a force to be heard, considered and reckoned with.
Posted by District Communicator at 6:01 PM